Start a Wiki
Wakfu is a French animated television series produced by Ankama Animation. It is based on the video game Wakfu by Ankama Games. It began airing in France on October 30, 2008. The first two seasons were released on Blu-Ray and DVD in English in 2014, followed by the third season streaming on Netflix on April 6, 2018 with a new cast. 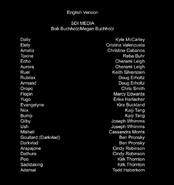 2018 Netflix Credits
Add a photo to this gallery
Retrieved from "https://english-voice-over.fandom.com/wiki/Wakfu_(2014)?oldid=181901"
Community content is available under CC-BY-SA unless otherwise noted.