Start a Wiki
Mirage of Blaze: Rebels of the River Edge is an original video animation series part of the Mirage of Blaze anime television series. It was released in Japan between July 28, 2004 and November 26, 2004, consisting of 3 episodes. The series was released in North America by Media Blasters on August 30, 2005. 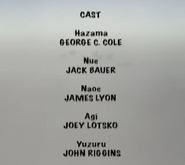 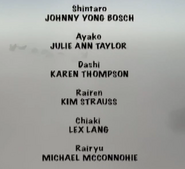 English Dub Credits (Part 3)
Add a photo to this gallery
Retrieved from "https://english-voice-over.fandom.com/wiki/Mirage_of_Blaze:_Rebels_of_the_River_Edge_(2005)?oldid=164263"
Community content is available under CC-BY-SA unless otherwise noted.