Start a Wiki
ERASED, known in Japan as Boku Dake ga Inai Machi (僕だけがいない街) is a Japanese anime television series based on the fantasy thriller seinen manga series written and illustrated by Kei Sanbe. The series was produced by A-1 Pictures and originally aired in Japan between January 8, 2016 and March 25, 2016, consisting of 12 episodes. The series was released in North America on Blu-Ray by Aniplex between October 18, 2016 and January 24, 2017. 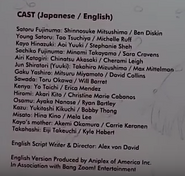 Blu-Ray Set 1 Credits
Add a photo to this gallery
Retrieved from "https://english-voice-over.fandom.com/wiki/ERASED_(2016)?oldid=73877"
Community content is available under CC-BY-SA unless otherwise noted.